WHAT TO DO FIRST BEFORE GOING TO INDONESIA?

WHAT YOU CAN AND CAN’T PACK?

To have a good trip, the main problem usually comes from the goods you bring along the journey. Thus, you are highly suggested to know the applicable rules that regulating passenger’s belonging from abroad to Bali, Indonesia.

Every passenger from abroad are obligated to declare all the belongings from abroad in Customs Declaration including personal medication, food, beverage, money, etc. Why? It is because the belongings you bring is considered as import goods. Certain goods are not allowed and some needed legal permission. Also, import goods is subjected to tax. However, every passenger is exempted USD 500 per person.  If you bring goods with value more than the exemption, the excess will be taxed. Thus, if you are planning to come to Indonesia, you need to check the belongings you can and cannot pack in order to pass the border.

KNOWING WHAT IS PERMITTED AND PROHIBITED!

Permitted goods are still limited and prohibited goods are totally banned. If you are accidentally or not breaking the rules, the fine is applicable. Keep in mind that passenger personal goods are the goods used for personal purposes including the rest supplies.

CAN YOU BRING FOOD OR BEVERAGE?

Some food or beverage allowed is still restricted and prohibited to be brought as passenger’s good from abroad to Bali, such as:

Please be aware of Quarantine concern goods such as animal, fish, plant, are obligated to be included with Quarantine permission from abroad and Indonesia.

Personal medicine is obligated to be declared in Customs Declaration and highly suggested to present the doctor’s prescription with the same dosage or amount that is prescribed or recommended. Keep in mind, medicine contain with narcotics and marijuana will be executed.

Please be considered in bringing cash money. Every passenger from abroad who bring cash with value more than Rp 100.000.000 or aproximately USD 7000 is OBLIGATED to declare it in Customs Declaration (CD Form). The failure to declare it, administration penalty is applicable (administration penalty is charged 10% from the amount of cash, in accordance to the regulation of Indonesia Ministry of Finance Number 100 in 2018).

Unaccompanied baggage is passenger’s goods that arrived before and/or after the passenger arrival under these requirements:

-The goods arrive within 30 (thirty) days prior to the arrival of the Passenger or no later than 15 (fifteen) days after the arrival of the Passenger;
-The sender and recipient are under the same name in accordance with the identity in the passport;
-The boarding pass or ticket and passport with immigration stamp are required to be presented to validate the passenger arrival; and
-The new goods found inside the baggage is subjected to tax.

THE LAST BUT NOT LEAST!

Do not forget the important documents that you will need such as passport, boarding ticket, and visa (if required). Make sure that your belonging is safe and will not cause any trouble during your visit or come back to Indonesia. Troubling goods will be processed immediately in order to protect Indonesia and its citizen.

HOW CAN YOUR BELONGING BE KNOWN? CUSTOMS DECLARATION IS THE ANSWER

Before arriving to Indonesia, you will be handed a form to declare all the goods you bring, including food, beverage, money, and other valuable goods, by the airlines crew. The form is a customs declaration. It is a requirement to fill the form since your belongings are considered as import goods. Afterwards, your customs declaration will be synchronized with the luggage you bring.

To make it easier about how customs declaration works, here are illustrations to explain the procedure you will pass:

Customs declaration is useful for tracking the goods you bring while visiting Indonesia. It also helps to prevent any illegal conduct, such as smuggling, for protecting the Indonesia citizen from unwanted affair.

PLEASE NOTE THAT THE CURRENT CUSTOMS DECLARATION FILLING CAN BE DONE ONLINE AT THE ECD.BEACUKAI.GO.ID LINK WHICH CAN BE DONE 2 DAYS BEFORE YOUR SCHEDULED ARRIVAL IN INDONESIA.

KNOWING IF YOUR BELONGINGS IS A COMMERCIAL/ NON-PERSONAL GOODS

What is a commercial or non-personal goods? It is a goods that is not intended for personal usage. The goods are brought to be sold, gifted as souvenir, and as sample, raw and auxiliary materials for industry.

Keep it in mind that every item of your belonging is considered as import goods.

If your goods are categorized as commercial goods, you are suggested to choose facility for temporary import. Indonesia’s regulation has two facilities you can choose to import commercial goods for your convenience.

You are highly suggested to use this facility to import your commercial goods since it is more suitable for importing a good amount of goods. Temporary import is divided into two kinds of facility as follow:

Temporary import according to PMK 142/ 2011 is determined as an act of importing goods in which will be re-export in 3 years of period. The terms and conditions are applied as follow:

Can your imported goods get customs exemption? Absolutely yes! However, you need to know the terms and conditions too. For further information and details of the goods in which can be imported with custom exemption, please click here.

You can get this facility by filing an application letter addressed to General Director through the Head of Custom Local Service and Supervisory Offices. However, if you are a passenger of an airlines, this condition can be avoided.

Application Letter must contain at least:

The application must at least be accompanied by these supporting documents as follow:

Toward temporary imported goods in a non-new condition and / or subject to the import trade system shall be subject to import approval from the competent authority before the goods discharge from the customs area.

ATA/ CPD Carnet System is the facility to import your goods temporary with customs exemption using a single entry document as the replacement of national customs document. The Carnet permits the equipment or merchandise to pass customs without the payment of import duties and import taxes, such as VAT or GST.

The types of goods that can be imported using ATA/ CPD Carnet System must have these criteria:

Choose CDP if you intend to bring any mean of transport.

WHAT IS CUSTOMS CLEARANCE?

What is Customs Clearance? Customs clearance is an activity of passing goods through customs for entering or leaving Indonesia. The goods you bring, either companied or not, will be checked. It is an act of synchronizing your customs declaration with your actual goods you bring. If something unusual is found inside your belongings, further inspection is unavoidable. For example, conducting body or physically inspection, re-checking your goods in X-ray, or even unloading all the goods.

HOW CAN YOU PASS CUSTOMS CLEARANCE?

After declaring the belonging on the customs declaration form and submitting it, you are suggested to determine either your goods will pass the red or green channel. If you bring some or one of items in the red channel, you are obligated to pay tax as a customs duty based on the regulation PMK/ 203/ 2017. Meanwhile, you will be served customs exemption if your items are not categorized in red channel in which it means that your goods passing the green channel. Customs will conduct analysis upon the goods declared and the passenger or crew should proceed the clearance through one of these following channels:

Red Channel, if the passenger or crew brings any of these following items:

Green Channel, if your items are not any goods aforementioned above in Red Channel. However, Customs has the authority to conduct physical inspections if there is any suspicious upon goods processed by Green Channel. 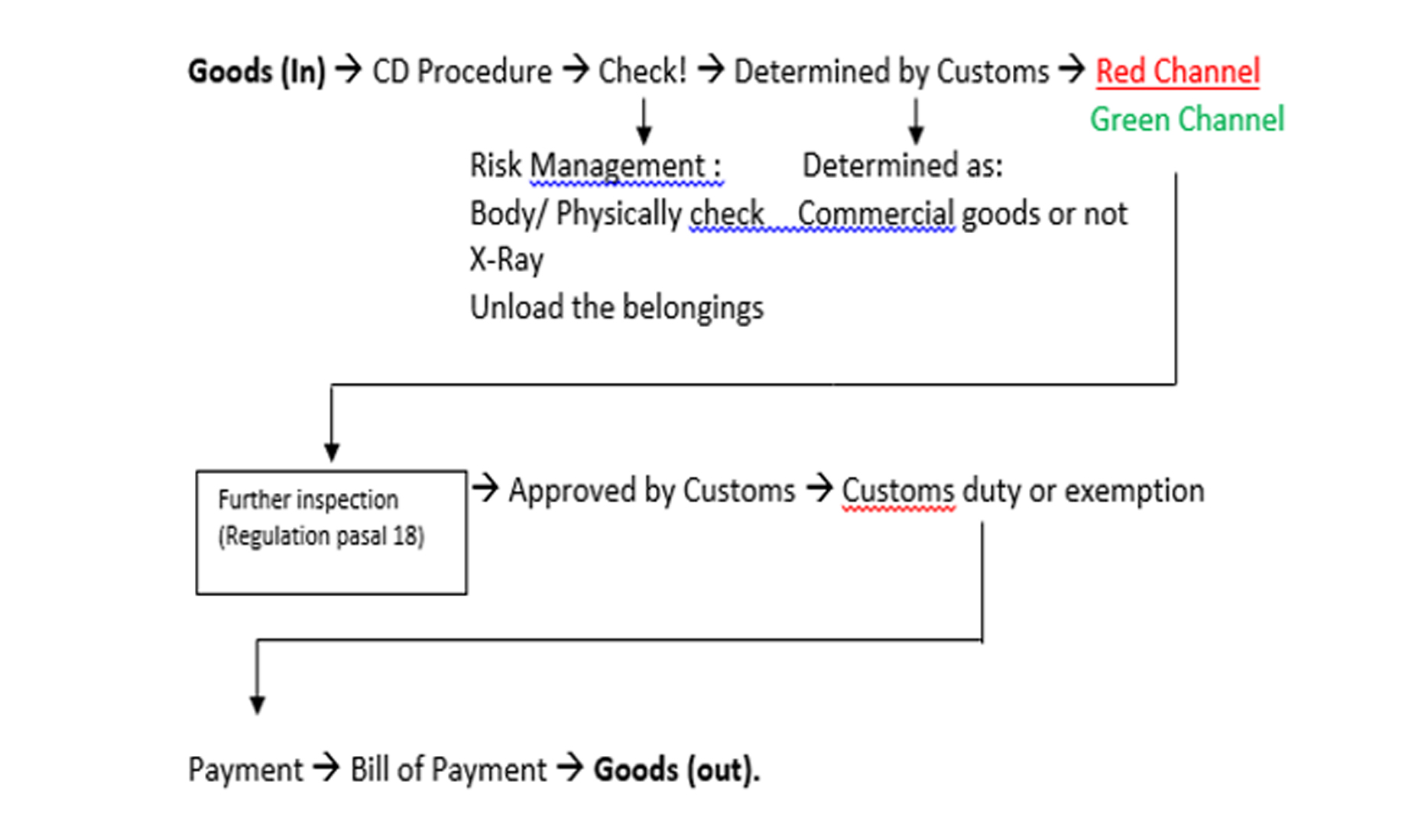